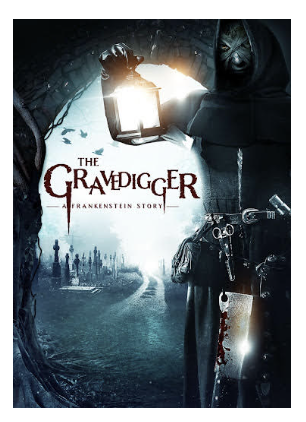 A Gravediggin’ man (Paul Homza) has a bit of surprise at work when he sees an actual living being in his cemetery instead of the usual stiffs he associates with.

Fear not for our hero though, as the “living” being he has found is stitched together from pieces of more corpses than currently reside in the boneyard he tends… that’s right boils n’ ghouls, he has run across none other than Frankenstein’s monster (Gisbert Heuer)!

Soon our protagonist is helping that misunderstood monster try to find any scrap of humanity left in that shamblin’ shell of patchwork flesh, but all isn’t well for long as the monsters creator, Victor (Tyler Charles Kane), is hot on his trail, and he’s eager to make that poor bastard double-dead for what he did to the “good” doctor’s family!

Directed by Erynn Dalton and written by Joseph Zettelmaier, The Gravedigger is a study in minimalism that manages to be engaging while offering a refreshingly different take on a story oft told. What that Film Criticism Corespondent Course bullshit means is through the use of a few sets and a whole lot of dialog (though bursts of action appear here and there), The Gravedigger comes across almost like a stage play, and in this case that is not a bad thing.

The reason this works so well is the acting on display, with both Homza and Heuer delivering solid performances that keep things grounded despite the fantastic elements of the story, and the performances could have easily flown into over-the-top melodrama but these cats keep it in check and are engaging throughout… and believe me, the supporting cast is also up to the terrifying task at hand.

Additionally, the work of special makeup effects artist Cassie Gilmore utilized to bring the famous monster to life is rather awesome indeed, and the music courtesy of composer Geoffrey Short along with the moody cinematography of Fernando Barron II create a suitably dark and Gothic atmosphere.

To sum it up; while a more understated take on Mary Shelley’s enduring creation, The Gravedigger still manages to entertain with it’s solid acting and production.

The Gravedigger is available on DVD and On Demand now from Indican Pictures.