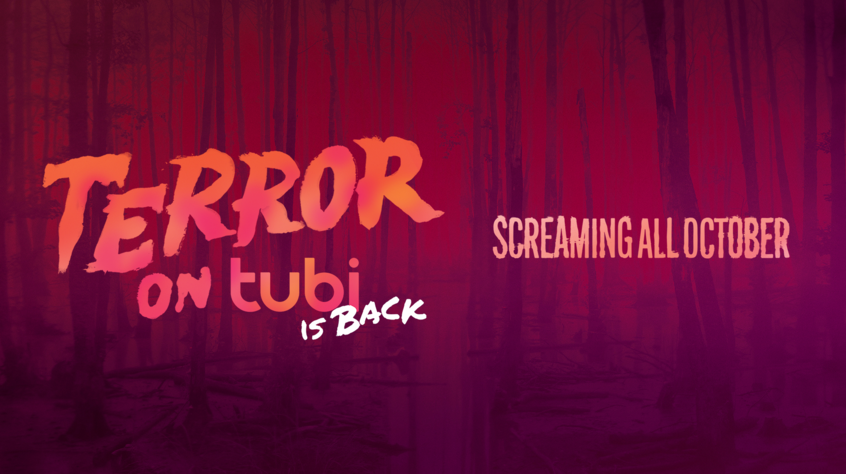 Tubi has now announced its lineup for the resurrection of “Terror on Tubi,” a month-long streaming celebration beginning October 1st of 13,000 spooky, eerie, thrilling, creepy, and terrifying titles that fans love to indulge in around Halloween. Creeping into the catalog of Tubi’s scary good streams are six brand-new Tubi Originals that will debut throughout October, ranging from beastly and chilling documentaries to slasher and thriller films, including the originals ALONE IN THE DARK; BATTLE OF THE BEASTS: BIGFOOT VS. YETI (October 12); THE FINAL ROSE (October 14); a remake of the cult classic TERROR TRAIN (October 21); LIGHTS, CAMERA, MURDER: SCREAM (October 26), and A PARTY TO DIE FOR (October 28).

“Terror on Tubi” will also offer timeless Halloween content, from spooky seasonal titles to horror film buff favorites, totaling 27,000 hours of movies and TV shows, including horror films such as Stephen King’s “It,” “The Texas Chainsaw Massacre,” “Hellraiser,” and “Twilight Zone: The Movie” as well as thrillers such as “Interview with the Vampire,” “Silence of the Lambs,” “Predators,” and more.

Tubi Originals previously launched on the service will also be a part of the scares, including REQUIEM FOR A SCREAM, TITANIC 666, ERADICATION, TOW, TEARDROP, UNBORN, HELLBLAZERS, HARLAND MANOR,  FAMOUSLY HAUNTED: AMITYVILLE, and CELEBRITY EXORCISM, whose exorcist, Rachel Stavis, we interviewed.

Brand-new Tubi Originals debuting as part of “Terror on Tubi” include:

ALONE IN THE DARK (launching October 7)

A recent divorcée under house arrest must deal with a stalker that appears to have control over her surroundings.

From MarVista Entertainment, Bri (Novi Brown, “Sistas”) is a recent divorcée who is forced to live under house arrest following her ex-husband Michael’s (Christopher Bencomo, “The Rookie”) crimes. She must deal with uncovering the truth after she encounters an elusive stalker who appears to have control over her surroundings. Also starring Kimberly Daugherty (“A Christmas Movie Christmas”), Terrell Carter (“Empire”), and Malcolm Goodwin (“Reacher”), ALONE IN THE DARK is directed by Brant Daugherty (“Pretty Little Liars”), and co-written by Daugherty and wife, Kimberly. The film is executive produced by Marianne C. Wunch (“A Job to Die For”), Larry Grimaldi (“The Curious Case of Dolphin Bay”), Hannah Pillemer (“Stay Awake”), and Fernando Szew (“Rounding”) with David Sweeney (“In A Relationship”).

BATTLE OF THE BEASTS: BIGFOOT VS. YETI (launching October 12)

Bigfoot and Yeti go toe-to-toe in the ultimate showdown. Who will come out on top? Two beasts enter, only one will survive!

From Fox Alternative Entertainment comes an epic fight-to-the-death between Bigfoot and Yeti. In a tale-of-the-tape unlike any before, these mega monsters of myth are analyzed for their strengths, weaknesses, fighting styles and ferocity. Bigfoot and Yeti go toe-to-toe in the ultimate showdown. Who will come out on top? Two beasts enter, only one will survive!

A young single mother arrives on a remote island to compete on The Final Rose, TV’s number one dating show, and slowly discovers that a mysterious killer is slaying the contestants, one by one.

From The Cartel, Jess (Christina Masterson, “NCIS: Los Angeles”) is a young single mother who arrives on a remote island to compete on The Final Rose, TV’s number one dating show. Her quest for love becomes a fight for survival when she slowly discovers that a mysterious killer is slaying the contestants, one by one…and the cameras are rolling. Jess must navigate a sea of two-faced beauty queens, coldhearted producers, and one mysterious and deadly killer in order to get off the island alive. THE FINAL ROSE also stars Brittany Underwood (“One Life to Live”), Brytni Sarpy (“The Young and the Restless”), Kyla Nova, Carrie Wampler (“Big Little Lies”), Robert Adamson (“The Young and the Restless”), Roger Howarth (“General Hospital”), Brian McGovern (“Rules of Engagement”), Robert Palmer Watkins (“The Walking Dead: World Beyond”), Taylor Foster (“Criminal Minds”), and Sarah Nicole Robles (“The Fosters”). The film is directed by Tim Cruz (“Secrets at the Lake”), written by Cruz and Blake Rutledge (“Punching Up”), and produced by Stan Spry (“Creepshow”) and Eric Woods (“Harland Manor”).

Based on the 1980 cult classic, TERROR TRAIN is a contemporary reimagining that follows a group of college seniors aboard a party train which soon descends into chaos as a masked killer wreaks havoc on the rails.

Produced by Incendo, this contemporary reimagining of the 1980 cult classic follows Alana (Robyn Alomar, “Utopia Falls”) and a group of college seniors who board a party train for a Halloween-themed bash, but their fun spirals into fear as attendees are killed off one by one by an unknown killer. Concealed by costumes and plagued with chaos, everyone is a suspect. As the party train continues full steam ahead, Alana must race against the rails to find the killer before she becomes the next victim. Tim Rozon (“Wynonna Earp”) also stars in this remake written by Ian Carpenter and Aaron Martin (“Slasher”), directed by Philippe Gagnon (“Amber Alert”), and executive produced by Graham Ludlow (“Talent Drivers”), Shari Segal (“The Christmas Checklist”) and Brook Peters (“The Christmas Checklist”).

This two-hour documentary goes behind the scenes of one of America’s most beloved horror movies, “Scream,” to uncover the shockingly true story of serial killer Danny Rolling.

From FOX Alternative Entertainment, this two-hour documentary goes behind the scenes of one of America’s most beloved horror movies, “Scream,” to uncover the shockingly true story of serial killer Danny Rolling. From the voyeuristic child growing up in Shreveport, Louisiana to the violent killer preying on college girls in Gainesville, Florida, viewers will follow the evolution from a man to a monster and the real-life moments that inspired one of Hollywood’s most memorable movie villains along the way.

A PARTY TO DIE FOR (launching October 28)

An aspiring socialite wakes up after a night of partying to her new friend asking her to help get rid of a dead body.

From MarVista Entertainment, Sadie (Jonetta Kaiser, “Vampire Academy”) arrives in Los Angeles after escaping an unsavory past and reinvents herself as the successful socialite that she has always dreamed of being. She befriends Jessica (Kara Royster, “Supernatural”), a fun, slightly reckless daughter of a Vegas tycoon. After a night of debauchery, Sadie awakens to Jessica asking for help to get rid of a body, bonding the two of them by their grim decision and their dark secret. Also starring Jermaine Rivers (“The Gifted”), Madia Hill Scott (“For Life”), Shay Guthrie (“The Virtuoso”), Nakia Dillard (“Law Abiding Citizen”) and Marko Christie (“Hustle”), A PARTY TO DIE FOR is written and directed by Nanea Miyata (“Dead in the Water”), produced by Roy Koriakin (“Retaliators”), co-executive produced by Mattie Fellbaum (“Midnight at the Magnolia”), and executive produced by Marianne C. Wunch (“Spinning Man”), Hannah Pillemer (“Hunter Hunter”) and Fernando Szew (“Patient Killer”).

Tubi, a division of FOX Entertainment, is an ad-supported video-on-demand service with more than 45,000 movies and TV shows in the U.S., including a growing library of Tubi Originals, 150+ local and live news, sports and entertainment channels, and 400+ entertainment partners, featuring content from every major Hollywood studio. Tubi gives fans of film, television, news, and sports an easy way to discover new content that is completely free.