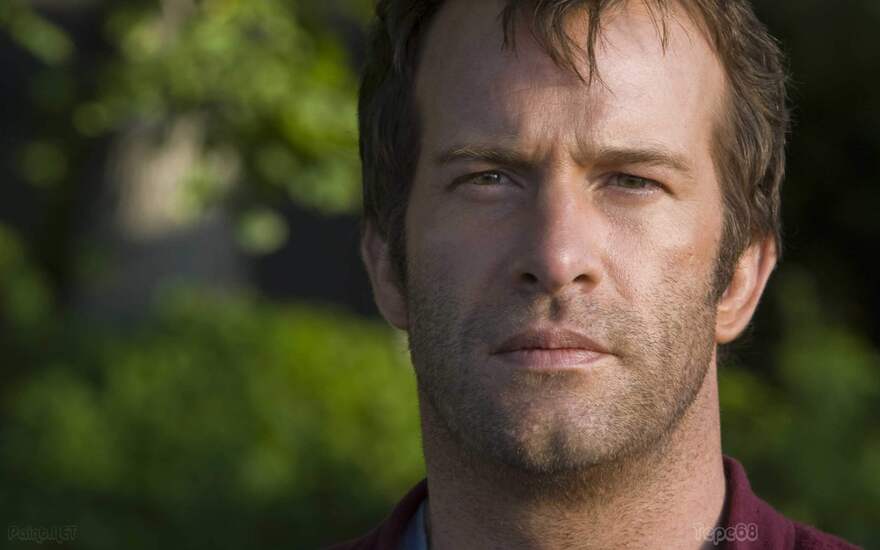 Everyone knows the name, Thomas Jane. From The Mist to Deep Blue Sea to The Thin Red Line and “The Expanse”, Jane never fails to impress. I had the pleasure of interviewing the talented actor about his newest film, the action-packed vampire horror Slayers, out TODAY!

In the movie, “Kick-ass vampire slayer, Elliot Jones (Thomas Jane), made it his life’s mission to take revenge on the bloodsuckers who murdered his teenage daughter. After years of tracking them, he has finally reached their secret and hidden base. But to get to them he will need to use a motley crew of social media superstars. Enter ‘The Stream Team’: party-girl Jules (Abigail Breslin), gen-z pro-gamer Flynn (Kara Hayward), and their team of trend-makers and breakers! With a hundred million-plus combined followers, they have attracted the attention of reclusive billionaire Beverly Rektor (Malin Akerman), who invites them to party at her multimillion-dollar vacation compound. They soon discover these rich people are none other than the ancient vampires that Elliot Jones is chasing. When the team is being held captive in a house of horrors to serve the vampires’ plan to take over the world, Elliott is their only hope of survival.

Jane: I love your accent. Kelli, where’s that from?

Kelli: “Thanks! I’m from Georgia.”

Jane: “Georgia? I love Georgia. I’ve shot a bunch of stuff down there and I’ve always been impressed with the people. You’ve got a  really good group of people down there.”

.Kelli: “There’s nothing wrong with that. I must confess, I’m a big fan of your work.”

Kelli: “I’ve always wondered what you must have thought the moment you read the final moments of The Mist script for the first time. I love that movie.”

Jane: “Oh, yeah, that’s a good question. So I am a big Stephen King fan, like everybody else.  I’ve read the short story and uh, and I read the script and I was like, ‘I don’t remember that ending’. So, I went back and, and read, reread the short story, and yeah, sure enough, that was Darabont all the way, Frank Darabont, who wrote and directed it, uh, slapped that ending on there. It was there from the beginning. Everybody fell in love with it, you know, it’s a real gut punch and it was risky. And we got offered more money if we’d change the end than we had, about double the budget for the special effects. But the man turned it down. We said, ‘No, this is the movie we wanna make.’ I had dinner with Stephen King, and Darabont, sometime during shooting, And we asked him about the ending and he said, ‘Man, if I had have thought of that ending, I would’ve put it in there.’ And so we got the stamp of approval from Stephen King and we were off to the races.”

Kelli: “That’s awesome. That ending crushed me, but in a good way, it made me feel something. Now, I’ve seen it a hundred times.”

Jane: “Right? Yeah. It came out on Thanksgiving weekend 15 years ago, and that was about the worst weekend that you could possibly pick for a film like that because Thanksgiving weekend is family weekend. That’s the weekend when families eat big dinners and they all go out to the movies. So it didn’t go over so well with the Thanksgiving crowd. But it’s found its audience.”

Kelli: “That’s very true. It really has blossomed with fans over the years. Speaking of fans, I think they’ll really enjoy your new movie, Slayers. I did. It’s a fun flick.”

Jane: “Yeah, it was fun. We had a blast doing it. It premiered at Scream Fest just a few days ago, and the audience loved it. If you dig horror and you like a laugh, this is a good couple of hours.”

Kelli: “It is. And how do you go from playing something super serious like The Mist to something more lighthearted like Slayers?”

Jane: “The job of a storyteller is to tell stories. I’ve been fortunate enough to tell a whole bunch of different stories in different genres. It is part of what keeps things interesting for me. I’ve always been a big horror fan. I haven’t done too many of ’em. You know, I, I could think of The Mist, 1922 that I did for Netflix, another Stephen King project, that’s got some horror to it.  I hadn’t done too much horror, uh, and maybe that’s a good thing, but I’m a big fan and I was lucky enough to dip my toes into it with this one. I was saying that,  you know, we’re storytellers. That’s what we do. So when you have the opportunity to tell all kinds of different stories, completely different sorts of tones and moods, it’s like visiting another planet. You know, I’d hate to stick with one planet my whole life. I like traveling as many different planets as I can, checking ’em out.”

Kelli: “Right. I get it. What was your favorite aspect of filming Slashers?

Jane: “This one wasn’t so, uh, fun technically, we shot it in the middle of Covid. So, uh, everybody’s saddled with a bunch of different rules that kept us apart. You know, everybody had their own little zone. Everybody had a mask on. I didn’t know what anybody looked like till the end of the movie when they could take their masks off. I met everybody just by looking at their eyes. And, you know, the face masks, the gloves, the, it’s just odd, you know, especially when you get a group of artists together, makeup artists, special effects artists, cinematographers, the directors,  all the crew. Everybody’s an artist. I think it’s a little tougher on artists than it might be on people who work in cubicles. But we were fortunate to be able to make the movie during the pandemic. So, um, I’m grateful for that.”

Kelli: “If you had to give fans a reason to watch it what would you say?”

Kelli: “That’s was reason enough for me [laughter].”

Jane: “Elliot Jones is the character I play. He’s got a big beard. He lives in his RV and he’s uncovered the fact that a secret cabal of vampires has been running the world ever since anyone can remember. And you get these great little history lessons about what really happened, you know, the way the world was really run by vampires and who’s been fighting the vampires basically. A long line of slayers came before Elliot Jones and hopefully, there’ll be some slayers after Elliot Jones with the character that Karra plays. She’s kind of my wingman in this thing, and she takes the mantle of being, a slayer by the end of the film. So we just had a lot of fun together. I really liked working with Karra. The movie has a sense of humor and it comments on some of the crazy crap that’s going on in the world right now. So shit, I’d watch it just for that alone.” 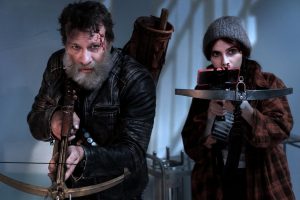 Kelli: “It’s a great movie. I love the comedy mixed in. So, what’s next for you?”

Jane: “I did a show for Amazon called “Troppo” and that did really well for everybody. It’s free on Amazon and we shot it in Australia. It’s an Australian co-production, so we’re going back to shoot another one. People really liked it, so they want us to do another one. I’m looking forward to that. And then Renegade’s got a couple of movies coming up. We’re doing a film called Relentless, which is an action movie with a really great script. And I’m teaming up with Joel Suza, who directed Crown Vic, uh, with me a couple of years ago. We’re gonna make a movie called The Alternate. It’s about a guy who gets stuck on jury duty and uncovers a bunch of, uh, you know, he’s an ex-military guy. He’s a little bit like Elliot Jones. He doesn’t take any crap. He kind of says what’s on his mind. And I think we need characters like that these days.”

Kelli: “We always need strong characters. I look forward to checking out those projects.”

Thomas Jane is a fantastic actor and luckily for us, there seems to be no shortage of movies and series headed our way. Be sure to check out Slayers, in theaters, On Demand, and on Digital today. And follow him on Twitter to stay up to date on his projects and the projects from his banner Renegade Entertainment. 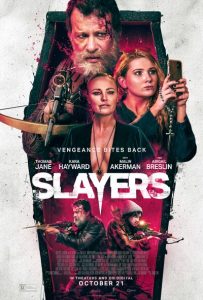 If for some insane reason you haven’t seen The Mist, or you would like to watch it again, you can watch it now on Prime Video and on Netflix where you can also watch his intense film 1922, also based on a Stephen King Tale.

← Prev: Horror-Thriller 'The Retaliators,' Featuring Five Finger Death Punch & Papa Roach, Is Out Today Next: Monster Movie 'Pipeline' Is Out Now On VOD →