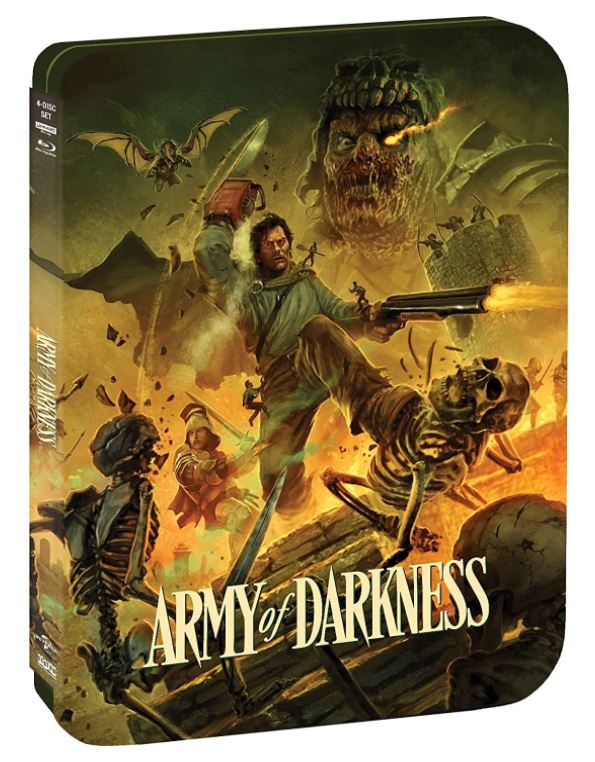 Army of Darkness (technically Evil Dead III: Medieval Dead)  begins with our hero, the hilariously abrasive braggart Ash (the legendary Bruce Campbell in the role that made his ass such a legendary legend in the first place) trapped in the Middle ages and at the mercy of King Arthur (Marcus Gilbert) who has every intention of chucking our hero in his Deadite-infested pit and calling it a day.

And he does, but Ash has one strong skill-set in his arsenal… he’s really good at fighting un-dead demons, and by effect saving his own ass… and luckily his chainsaw has made the cross-time journey as well!

Before long, our hero finds himself caught between warring armies, both human and walking dead in a quest to obtain the Necronomicon and make his way back to his own time!

Continuing the trend of adding laughs in with the lacerations exhibited by Evil Dead II, Army of Darkness takes things right into the Looney Tunes-zone, and it’s a brilliant move that manages the seemingly impossible; namely taking a franchise that began as pure horror and transforming it into living cartoon… and instead of alienating fans and causing them to bitch off the charts, it was embraced as the entertaining mother fucker it so definitely is!

A lot of the credit there has to be given for series star Campbell who’s charisma and charm win over the audience even when Ash is being a complete skid-mark of a human being to everyone in his general vicinity. Additionally his physicality is amazing to behold… and it’s just a blast watching him take insane amounts of abuse and just pop-up and get back to brass tacks!

Of course series director/co-writer Raimi’s breakneck pacing and signature kinetic camera-work add immeasurably to the fun to be had here, as does the inclusion of traditional stop-motion animation techniques that gives this entry the feel of a Ray Harryhausen effects filled classic adventure romp such as Jason and the Argonauts.

All of the above is a treat for the eyes as well as ye olde funny-bone, and believe you me, Army of Darkness has never looked as good as it does here (and I’ve seen this flick on everything from VHS on up… hell, I saw it theatrically on it’s initial run back in ‘92… fuck, I’m cool… and old… mostly old… )!

The 4K transfer utilized by Scream Factory for this release looks mighty fine indeed with heightened detail levels and more brilliant colors over previous releases that make every epic moment shine (as an aside you can tell nothing much could be done with the stock footage from Evil Dead II which really sticks out when compared to the clarity of the “new” footage.

Speaking of 4K UHD, the theatrical cut (sourced from elements from the film’s distributor, Universal Pictures) is the only version here available in this format… which as you may surmise means we have more time to spend in this Deadite’s Army!

Disc 2 brings us a Blu-ray version of the Theatrical Cut, so the sinister song remains the same there story-wise, but unlike Disc 1, here we get a great selection of special features for our eerie enjoyment!

Kicking things off we get a 96 minute “making of” documentary that takes us through the film’s tumultuous production via copious interviews with cast and crew (minus Sam Raimi) and a mountain of behind-the-scenes footage. This is a fascinating and fun watch that provides the fans with a treasure trove of often hilarious anecdotes and is worth the price of admission on it’s own!

Also included are the film’s theatrical trailer, a collection of TV spots, and a video promo.

Disc 3 contains Raimi’s Director’s Cut of the film (which includes extended sequences not seen in the theatrical cut as well as the reinsertion of that ending mentioned previously), that features an audio commentary from Raimi and Campbell (along with co-writer Ivan Raimi) that takes us through the film’s long production in detail along with plenty of anecdotes and humor.

Disc 4 (who’s menu screen lists the disc number as 3) brings us two more versions of the film;  the International and Television Versions respectively, which feature alternate takes and extended sequences that differ slightly from the previous versions (not to mention the expected censoring the TV version contains).

Special features here include: the film’s international trailer, an absolutely jaw-dropping image gallery filled with heaps of production art, and behind-the-scenes photos, a separate gallery focusing on props and rare photos, a collection of storyboards, and a piece on KNB effects.

Bottom line; Army of Darkness is a classic for the ages; a living cartoon filled with skeletons, smart-assery par excellence, and a grand sense of adventure that proves irresistible on every viewing, and the 4K UHD upgrade here will provide fans with their best look at the film yet!

← Prev: 'The Sleep Experiment' Will Give You Nightmares This November (Trailer) Next: The True Story Inspired Horror 'A Savannah Haunting' Premieres This Week On Digital →