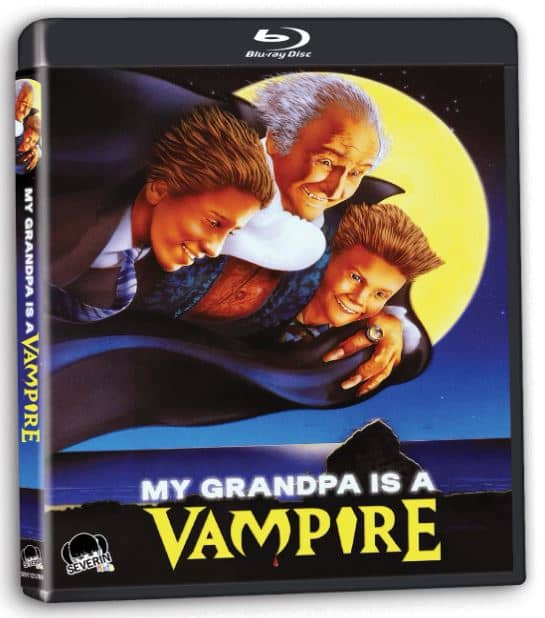 Lonny (Justin Gocke, whom you may remember as Raymond Burr’s grandson in the American inserts of Godzilla ’85) heads down New Zealand-way to visit his Aunt Leah (a delightful performance from Dame Pat Evison)… but who he is really there to visit is his Grandpa, Vernon Cooger (The Munsters‘ Al Lewis); a delightfully daffy ol’ coot whom Lonny’s monster-obsessed kiwi pal Kanziora (Milan Borich) is convinced is a vampire.

Then Cooger dies, so that theory was right shit, wasn’t it?

Oh, except Cooger does come back to life, as he actually is a vampire… huh, there’s truth in advertising after all!

Now as stated, Cooger is a vampire, but one that has chosen a (mostly) mortal life that allows him to age and eventually die, but that doesn’t stop him to getting up to a few rounds of Grade-A shenanigans once back among the living along with the help of Lonny and Kanziora… who in turn have to keep one step ahead of all parental figures if they want to keep Cooger’s supernatural secret!

My Grandpa is a Vampire is one hell of a unique flick; it’s one part modern fairy tale, one part Goonies-like adventure yarn, one part horror comedy, and all parts entertaining as fuck… but it has a weird streak a mile wide, which marks it as one of ours!

Touching on the first few aforementioned points, director David Blyth (Death Warmed Up) and screenwriter Michael Heath (Next of Kin) deliver a truly charming film filled with magic and a sense of innocent fun that also manages to create some creative additions to the time-worn vampire tropes; chief among them a vampire’s choice to live a nearly mortal life and being able to choose to become a regular vampire upon death. As stated this adds a bit of fairy tale spice to the proceedings that also set it apart from most entries in the bloodsucker biz!

Another element to this film’s success is it’s excellent cast, lead by Lewis who provides a performance that makes our titular vamp sympathetic, lovable, and hell-raisin’ in equal measure, and it’s a true tour de force performance that takes a riff on his signature role and makes it truly something special!

Adding to the fun to be had with this Blu from Severin (under their Severin Kids label) here are some wonderful special features which kick off with an informative audio commentary from Blyth and Heath that take us through the film’s creation from it’s audio story roots to it’s debut on the silver screen.

Following that we get an audio interview with Munsters Super-fan/actor Daniel Roebuck (who himself has taken over the role of Grandpa in Rob Zombie’s The Munsters remake, which I reviewed right here), as well as Lewis’ widow, Karen Lewis.

Next comes the previously mentioned original five episode radio play Moonrise upon which the film was based, and the film’s trailer.

Unjustly thrown into obscurity, My Grandpa is a Vampire is an absolute gem of a horror-tinged family film and comes highly recommended!