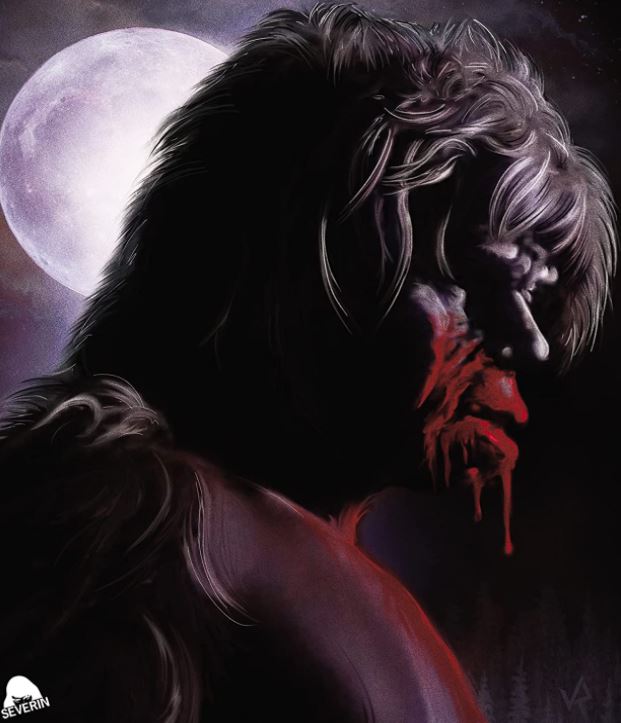 Professor Nugent (Michael Cutt) ostensibly teaches anthropology, but his real obsession is bigfoot… basically this mother fucker teaches Bigfoot 101, replete with newspaper handouts with headlines screaming such newsworthy events as “Lettuce”, and gory flashback inserts where a woman with sizeable… hair (seriously, that helmet had to be a wig) watches her paramour being grabbed mid-coitus by our hirsute antagonist and being left to bleed out on the roof of his shaggin’ wagon.

Naturally when Carla Thomas (Shannon Cooper) asks Nugent to help her locate the creepy cryptid she believes is responsible for her father’s murder he can’t say no… and soon he, and his select group of victims… err, I mean students trek off to do just that.

Soon the Prof. and co. are on the trail of a local recluse named Wanda (Melanie Graham), the daughter of a lunatic preacher who’s parishioners engaged in cannibalism, inbreeding, and human sacrifice, whom they find engaged in an occult ritual in the woods involving masked sex and a crude statue of Bigfoot… which the gang puts a stop to right quick, seeing as our heroes are apparently fun adverse.

After a visit to Wanda’s cabin the following morning results in the woman having a nervous breakdown at the mere mention of ol’ Foot, our heroes soon find themselves at the (not so tender) mercies of the kill-crazed creature!

Additionally a man whips out his dick for a piss and Bigfoot tears it off for no discernable reason… that’s a five fuckin’ star rating on it’s own!

Make no mistake, director James C. Wasson’s (working from a screenplay courtesy of Mike Williams based on a story by Jim L. Ball) Night of the Demon is the all-time greatest Bigfootsploitation movie ever made. It’s gory, needlessly violent, contains gratuitous nudity and bonus occultism… it’s absolute perfection!

While the acting and cinematography are solid (Graham in particular gives it her all no matter what crazy business the film has her getting up to), the real draw here is the mayhem I mentioned previously, and there’s plenty of it… just not in the story proper. The brunt of the Bigfoot action concerns randos getting offed in vignettes that the Professor relates to his students regarding previous attacks by the creature… that is until the third act when our heroes face the beast mano e mano after learning Wanda’s horrifying past via hypnosis (which also involves flashbacks, but with an actual member of the main cast this time).

Do all these inserts take away from the overall narrative flow? Sure, but honestly the whole affair is so completely batshit that it makes it’s own rules and lives by them like the outlaw it truly is… wait, what the fuck was I going on about?

Anyway, all of this mayhem looks pretty spiffy on this Blu-ray release as Severin has provided a new scan in 2K from the recently discovered 35mm answer print of the film and those that have seen the picture previous will be surprised at the clarity of the images. That being said, some of the colors are very muted and soft, especially during the film’s interior sequences which either have a blue under-tint, or appear drab and greenish.

On the positive end of the spectrum, there is a sizeable footprint’s worth of bonus material in this release spread across two discs!

Kicking things off we get an interview with producer Ball (yes the same guy that came up with the story for this monsterpiece) who is lively (and full of great anecdotes) as well as under no illusions as to the mayhem he helped wrought, both here and in the adult industry, as well as chats with the very personable Wasson (who seems very humble about being interviewed and provides a great overview of his rather remarkable career… including the origins of those vicious vignettes!), and cinematographer James Quick, (who discusses both his work on Night of the Demon well as his work on the unreleased 1964 fright flick Fraternity of Horror, which was produced by Ball and is included on this disc as well).

Disc two contains nothing but glorious bonus material beginning with an entertaining video essay from author David Coleman which explores Night of the Demon‘s place in Bigfoot-based cinema, as well as the film’s possible cinematic influences, followed by an interviews with legendary Swamp Thing artist Stephen R. Bissette (in which he discusses cryptid creatures in popular entertainment), author William Munns who goes into detail on one of cryptozoology’s most famous incidents; the Bigfoot footage captured by Roger Patterson in 1967 in Northern California, and author/cryptozoologist Lyle Blackburn.

Following that comes Ban the Sadist Videos!, a two part documentary covering the “Video Nasty” movement which lead more extreme horror films (such as Night of the Demon wouldn’t ya know… ) being banished from video store shelves and television by the British government. It’s fascinating viewing, and made me extremely happy that such fascist horseshit didn’t impact my video rental habits having grown up in the States.

Lastly comes an interview with Severin’s own David Gregory, who just so happened to direct those Ban the Sadist Videos! and provides first hand accounts of what it was like being a horror fan in 1980’s Britain!

Pound for putrid pound, Night of the Demon delivers the grizzly goods with a high gore content, crazy concepts, and plenty of that good ol’ wrongness we crave ’round these parts!

← Prev: Everything We Know So Far About Season 5 Of "Stranger Things" Next: The Most Remarkable Thrillers of All Time →