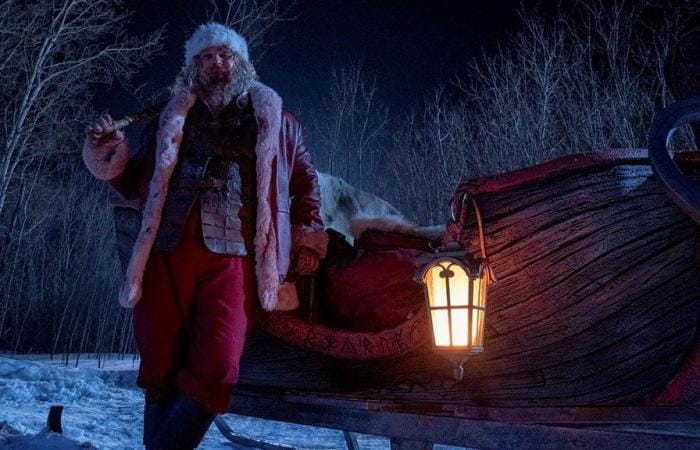 Christmas is coming, and like many horror fans, you are probably looking for holiday horror films to watch. We’ve got a list of new horror movies. So put on your jammies, pop some popcorn, turn down the lights, and settle for some holiday frights.

From 87North, the producers of Nobody, John Wick, Atomic Blonde, Deadpool 2, and Fast & Furious Presents: Hobbs & Shaw comes a dark as coal holiday action-comedy Violent Night starring “Stranger Things” star David Harbour as Santa. And the new trailer teases why you don’t want to get on his naughty list.

“When a team of mercenaries breaks into a wealthy family compound on Christmas Eve, taking everyone inside hostage, the team isn’t prepared for a surprise combatant: Santa Claus is on the grounds, and he’s about to show why this Nick is no saint.

Atlas Film is gearing up to gift horror fans with The Mean One, a new twisted take on the Grinch. Instead of making friends and becoming a new and improved Grinch this time, his hatred drives him to kill.

In the parody, “The Mean One” (David Howard Thornton, Terrifier 2) lives on a mountain above the town of Newville. Young Cindy You-Know-Who (Krystle Martin), whose parents were butchered by “The Mean One” twenty Christmases earlier, is returning to town to seek closure. When the dreadful green killer launches a new reign of terror that threatens to destroy Christmas, Cindy finds a bold new purpose – trapping and killing the monster.

In the film, Father David (Graham Skipper, Dementia: Part II, Sequence Break), a catholic priest struggling to grow his congregation, encounters a stranger by the name of Terry (Jeremy Gardner, Bliss, Offseason) asleep one morning after Mass. Terry is without a home after a fight with his girlfriend Lexi (Taylor Gardner, Sadistic Intentions), and with Christmas less than a week away, David offers him a place to stay for the night. What begins as a simple act of kindness quickly turns complicated as Lexi arrives shortly after with news of being evicted from her house. David allows her and Terry to stay with him through the holidays on the condition that they open themselves to the healing power of God’s love. The harder David tries to reform the lives of these seemingly innocent strangers, the more he falls victim to their toxic ways, leading to the belief that their arrival is, in fact, a test from God. Will David pass the test and accept his new houseguests as they are? Or will he set aside the ways of Christ and resort to blood-soaked, Old Testament justice?

Christmas is coming, and in the upcoming holiday horror film, Christmas Bloody Christmas, Santa is watching, and that should scare the crap out of you.

From writer-director, Joe Begos (Bliss) comes a dark tale set on Christmas Eve. Fiery record store owner Tori Tooms wants to get drunk and party until the robotic Santa Claus at a nearby toy store goes haywire, making her night more complicated. Santa Claus begins a rampant killing spree through the neon-drenched snowscape against a backdrop of drugs, sex, metal, and violence, ultimately forcing Tori into a blood-splattered battle for survival against the ruthless heavy metal Saint Nick himself.

The release date has now been announced for Robert Livings and Randy Nunldall Jr.’s Christmas horror anthology The Christmas Tapes.

The film centers on a family’s movie night on Christmas Eve, interrupted by a stranger, insistent on making the following Christmas’ classic’ film himself.

To learn more about the movie, click on the film’s title.

← Prev: Two More "Supernatural" Stars Join The Cast Of "The Boys" Next: The Grinch Is Out For Blood In 'The Mean One' Trailer →