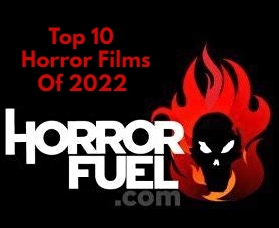 It’s that time, the year is quickly coming to an end, and after watching so many horror films, it’s time for HorrorFuel to pick the best of the best, and this year’s list called for some hard decisions, but we’ve made them. We present “HorrorFuel.com’s Top Ten Horror Films Of 2022.”

In this action-packed film, a group of older adults break out of a living facility and go on a rampage, brutally killing everyone in their path. As a family fights to survive and escape the horde, emotions run high.

A woman, still mourning the death of her previous baby, finds herself pregnant in a new house that holds spirits from the past. She struggles to stay sane and protect her new child. Not only spooky, but Bed Rest is also an emotional rollercoaster that will stay with you long after the movie ends.

Any woman who has experienced loss will connect to this story in a way that they have with a few other horror movies.

Be sure to check out our interview with its director Lori Evans Taylor.

Where To Watch: Tubi

Hellraiser  centers on “A young woman struggling with addiction which comes into possession of an ancient puzzle box, unaware that its purpose is to summon the Cenobites, a group of sadistic supernatural beings from another dimension.”

The movie is the franchise’s film since the original, earning its spot on this list.

Where to watch: Hulu

In the film, a preacher sets out on a mission of revenge after his daughter is found brutally murdered. The soundtrack alone is worth watching the action-packed movie for. The film stars a bunch of music icons such as Tommy Lee, Ice Nine Kills, and Papa Roach and features a killer soundtrack.

Also, check out our interview with the film’s director and star, Michael Lombardi.

Where to watch: Prime Video

Barbarian is filled with unexpected twists and turns. Two people (Bill Skarsgard and Georgina Campbell) have accidentally booked the same Airbnb for the same night. When they discover underground tunnels, their stay turns into a nightmare.

Where to watch: Digital and Blu-ray

After witnessing a bizarre, traumatic incident involving a patient, Dr. Rose Cotter starts experiencing frightening occurrences that she can’t explain. As an overwhelming terror begins taking over her life, Rose must confront her troubling past to survive and escape her horrifying new reality.

Where to watch: Prime Video, Paramount+

The Cursed is one of the best werewolf films we’ve gotten in years. It’s clever, brutal, and fresh. In the film, set in the 1800s, a village becomes the hunting ground for a monster.

Where to watch: Hulu, Blu-ray, Digital

2022’s Scream (5) finds Ghostface back, slicing and dicing a new generation of victims and some returning characters. But the death of the main character affected us the most.

Horror and Sci-fi combine Jordan Peele’s Nope, which might rival Get Out. In the film, a family struggles to keep their ranch. When they discover a UFO, things go from bad to worse.

Where to watch: Peacock, Digital, Blu-ray

Prey is the Predator film fans have long deserved. This action-packed, blood-drenched film finds a young Native woman trying to earn her spot within her village. While hunting, she discovers there’s more to fear than the white settlers.

Where to watch: Hulu, Blu-ray

Click on the film’s highlighted title to learn more about the movie. Criteria for films to make a list: It must have a full release by December 10th.

← Prev: Ashley Benson Finds Herself Hunted In 'Alone At Night' (Trailer) Next: Season 4 of Netflix's True Crime Series "I Am A Killer" Is Now Streaming →