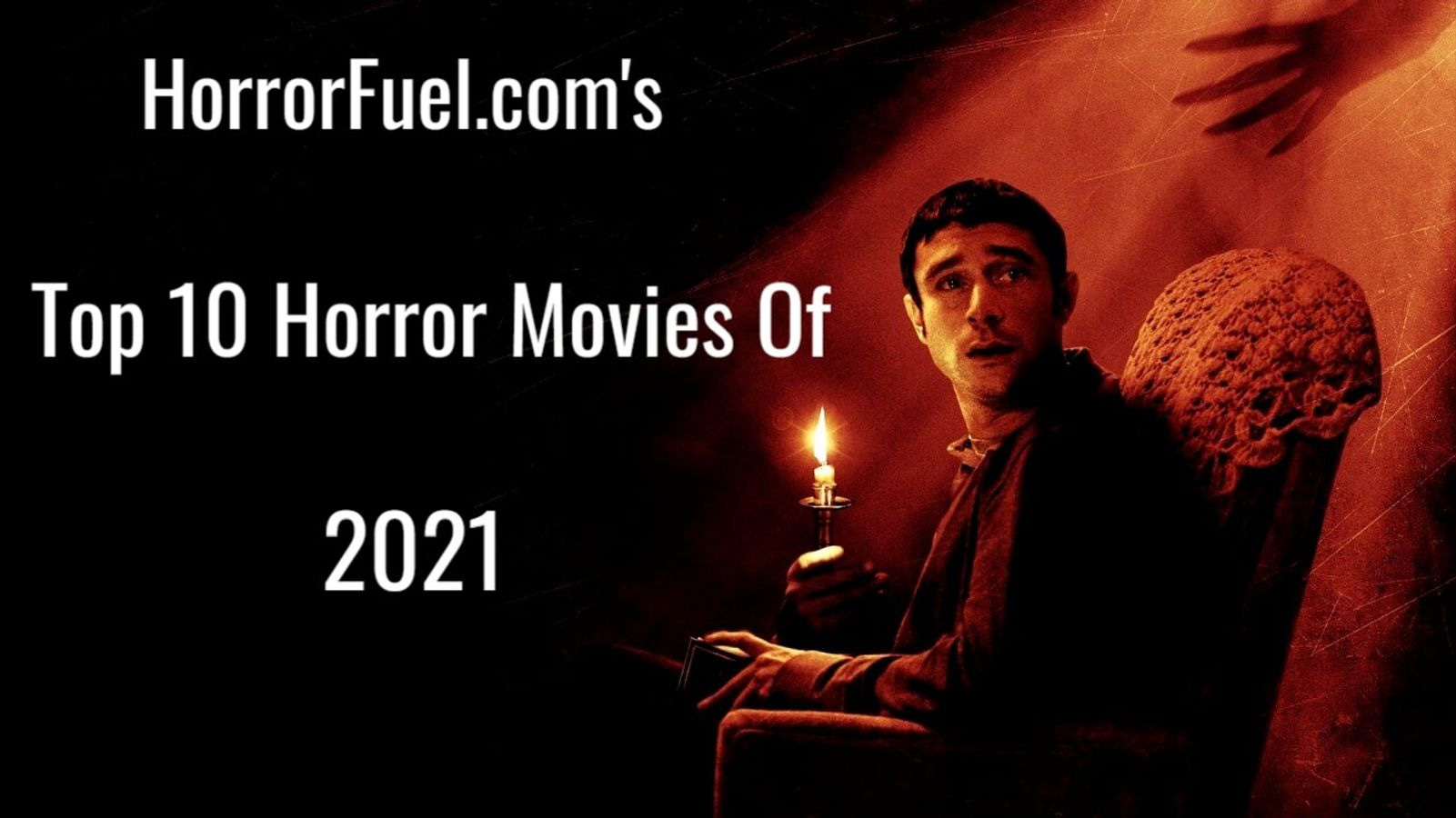 It’s that time of year again, where we share with you our top 10 favorite horror films of the year. It wasn’t easy to narrow it down, there were so many great films released this year, but these films stood out.

“For as long as residents can remember, the housing projects of Chicago’s Cabrini-Green neighborhood were terrorized by a word-of-mouth ghost story about a supernatural killer with a hook for a hand, easily summoned by those daring to repeat his name five times into a mirror. In the present day, a decade after the last of the Cabrini towers were torn down, visual artist Anthony McCoy (Yahya Abdul-Mateen II; HBO’s “Watchmen”, Us) and his partner, gallery director Brianna Cartwright (Teyonah Parris; If Beale Street Could Talk, The Photograph), move into a luxury loft condo in Cabrini, now gentrified beyond recognition and inhabited by upwardly mobile millennials.

With Anthony’s painting career on the brink of stalling, a chance encounter with a Cabrini-Green old-timer (Colman Domingo; HBO’s Euphoria, Assassination Nation) exposes Anthony to the tragically horrific nature of the true story behind Candyman. Anxious to maintain his status in the Chicago art world, Anthony begins to explore these macabre details in his studio as fresh grist for paintings, unknowingly opening a door to a complex past that unravels his own sanity and unleashes a terrifying wave of violence that puts him on a collision course with destiny.”

Candyman gives is a sequel horror fans aren’t ashamed to admit they like, unlike many of the sequels we get these days. It’s a breath of fresh air in the genre while paying homage to the original we all know and love.

9. The Conjuring: The Devil Made Me Do It (review)

The Conjuring: The Devil Made Me Do It reveals a chilling story of terror, murder, and unknown evil that shocked even experienced real-life paranormal investigators Ed and Lorraine Warren. One of the most sensational cases from their files, it starts with a fight for the soul of a young boy, then takes them beyond anything they’d ever seen before, to mark the first time in U.S. history that a murder suspect would claim demonic possession as a defense.
The Devil Made Me Do It’s villain, “The Occultist” was played by  Eugenie Bondurant who sat down with us for an interview to talk about her character and filled us in on what took place behind the scenes. You should check it out, what she had to say is really interesting.

I think the reason I liked this film has to so do with it being more complex than other installments. It felt more layered and as if we were getting two stories for the price of one.

In the film which premiered at Sitges, “Cristina, a journalist of Mexican origins, travels to the home of her ancestors in Veracruz to investigate a story involving witchcraft and healers. Once there, she is kidnapped by a group of locals who claim that she’s possessed by the devil and that she needs to be exorcised. When she tries to escape this nightmarish situation, the woman starts to believe that her captors may actually be right…”

The Old Ways is a great twist on the possession subgenre and features a woman finding not only her strength but her place in the world. It doesn’t feature Catholic priests like we almost always get, it’s a new perspective from an old culture.

Set against the backdrop of England at the end of the 17th century as the Great Plague and the obsession with witch hunts ragging, is Neil Marshall’s stunning horror thriller The Reckoning.

In the absolutely stunning film, “After losing her husband during the Great Plague, Grace Haverstock (Charlotte Kirk) is unjustly accused of being a witch and placed in the custody of England’s most ruthless witch-hunter, Judge Moorcroft (Sean Pertwee). Forced to endure physical and emotional torture while steadfastly maintaining her innocence, Grace must face her own inner demons as the Devil himself starts to work his way into her mind.”

Joe Anderson and Steven Waddington also star in the film that Marshall wrote with Charlotte Kirk and Edward Evers-Swindell, based on a story by Antony Jones and Nico Evers-Swindell.

The Reckoning is a powerful film about a woman and her determination to survive while facing overwhelming odds and never giving up. It’s brutal and unapologetic and You can’t help but feel for the main character as you remember that the torture she suffered was a reality for many women during the witch hunt.

“After a proposed pipeline creates divisions within the small town of Beaverfield, and a snowstorm traps its residents together inside the local inn, newly arrived forest ranger Finn (Sam Richardson) and postal worker Cecily (Milana Vayntrub) must try to keep the peace and uncover the truth behind a mysterious creature that has begun terrorizing the community in Werewolves Within.

Well written and funny as hell, Werewolves Within is a surprising and entertaining flick that every horror fan needs to see.

The new installment of the franchise follows a single mom (Carrie Coon) and her two kids (Finn Wolfhard and McKenna Grace) as they move to their grandfather’s farm and discover their family’s ties to the Ghostbusters. Events force the kids to pick up where their grandfather left off in an attempt to save the town.

Paul Rudd (Antman) stars alongside Mckenna Grace (Captain Marvel), Finn Wolfhard (Stranger Things), and Carrie Coon (Gone Girl). Most of the cast of the original are returning including Sigourney Weaver, Bill Murray, Ernie Hudson, Dan Aykroyd, and Annie Potts. Afterlife is directed by Jason Reitman, who co-wrote the script along with Gil Kenan.

By capitalizing on our nostalgia for the first two films, it brings a new generation into the story. It’s a fun flick that leaves you wanting to watch it over and over.

Directed by Rodo Sayagues, who co-wrote the film along with  Fede Alvarez (Don’t Breathe, Evil Dead), Don’t Breathe 2 reveals that the “Blind Man” has been hiding out for years in an isolated cabin and has taken in and raised a young girl orphaned from a house fire. Their quiet existence is shattered when a group of kidnappers show up and take the girl, forcing the Blind Man to leave his safe haven to save her.

Don’t Breathe 2 is simply badass, being full of action while being all about a father’s love.

John Krasinski‘s sequel to the 2018’s original finds the Abbott family (Emily Blunt, Millicent Simmonds, Noah Jupe) now facing the terrors of the outside world as they continue their fight for survival in silence. Forced to venture into the unknown, they quickly realize that the creatures that hunt by sound are not the only threats that lurk beyond the sand path.

Part two is just as entertaining as the original and builds on the new world. It also leaves things open for a third installment and there are so many ways to story could continue to grow.

Antlers, directed by Scott Cooper and produced by Guillermo del Toro is based on the short story “The Quiet Boy” by Nick Antosca (“Chanel Zero”) who co-wrote the script with Henry Chaisson.

Set in small-town Oregon, a teacher (Keri Russell) and her brother (Jesse Plemons), the local sheriff, become involved with a young student (Jeremy T. Thomas) who is hiding a dark, dangerous secret that has severe consequences.

Starring Dave Davis, Menashe Lustig, and Lynn Cohen, the film is set over the course of a single evening in Brooklyn’s Hasidic Borough Park neighborhood. Low on funds and having recently left his insular religious community, Yakov (Dave Davis) reluctantly accepts an offer from his former rabbi and confidante (Menashe Lustig) to take on the responsibility of an overnight “shomer,” fulfilling the Jewish practice of watching over the body of a deceased community member. Shortly after arriving at the recently departed’s dilapidated house to sit the vigil, Yakov begins to realize that something is very, very wrong.

I spent a long time thinking about which film deserves the title of “Number One” this year. While there were so many great ones, I kept coming back to The Vigil. It is so different from many of the movies we get these days. It’s dark, intense, and scary, with great characters that you really feel for and cheer for. And It speaks for the Jewish people, a part of the community that is very underrepresented in horror. It made me feel a gambit of emotions from sadness, to fear, to shock. I believe it has earned its place at the top of this list. If you haven’t seen it, I recommend that you do so immediately. We sat down for an interview with both the director and star of The Vigil, be sure to check it out.

For more of HorrorFuel.com’s Top 10 lists be sure to check out Joseph Perry’s “Top 10 Film Festival Movies of 2021“.